How Kiali monitors your Istio infrastructure.

A service mesh simplifies application services by deferring the non-business logic to the mesh. But for healthy applications the service mesh infrastructure must also be running normally. Kiali monitors the multiple components that make up the service mesh, letting you know if there is an underlying problem.

A component status will be one of: Not found, Not ready, Unreachable, Not healthy and Healthy. Not found means that Kiali is not able to find the deployment. Not ready means no pods are running. Unreachable means that Kiali hasn’t been successfully able to communicate with the component (Prometheus, Grafana and Jaeger). Not healthy means that the deployment doesn’t have the desired amount of replicas running. Otherwise, the component is Healthy and it won’t be shown in the list.

Regarding the severity of each component, there are only two options: core or add-on. The core components are those shown as errors (in red) whereas the add-ons are displayed as warnings (in orange).

By default, Kiali checks that the core components “istiod”, “ingress”, and “egress” are installed and running in the control plane namespace, and that the add-ons “prometheus”, “grafana” and “jaeger” are available.

In some situations, it is useful to get information about the certificates used by internal mTLS, for example:

The certificates shown depends on how Istio is configured. The following cases are possible:

The following is an example of viewing the default case: 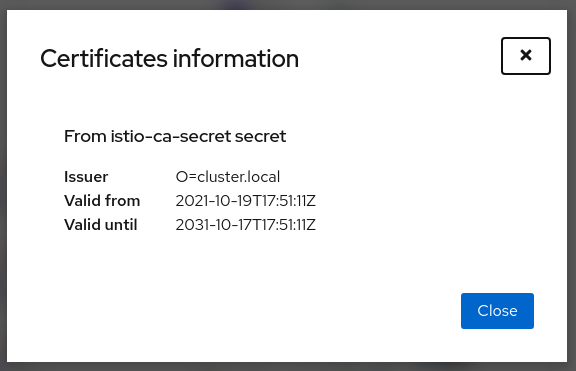 Note that displaying this configuration requires permissions to read secrets (istio-ca-secret by default, possibly cacerts or any secret configured when using DNS certificates).

Having these permissions may concern users. For this reason, this feature is implemented as a feature flag and not only can be disabled, avoiding any extra permissions to read secrets, but also a list of secrets can be configured to explicitly grant read permissions for some secrets in the control plane namespace. By default, this feature is enabled with a Kiali CR configuration equivalent to the following:

You can extend this default configuration with additional secrets, remove secrets you don’t want, or disable the feature.

If you add additional secrets, the Kiali operator also needs the same privileges in order to configure Kiali successfully. If you used the Helm Charts to install the operator, specify the secretReader value with the required secrets:

If you installed the operator via the OperatorHub you need to update the operator privileges as a post-installation step, as follows:

Replace secret-name-to-be-read with the secret name you want the operator to read and restart the Kiali operator pod after running the previous command.